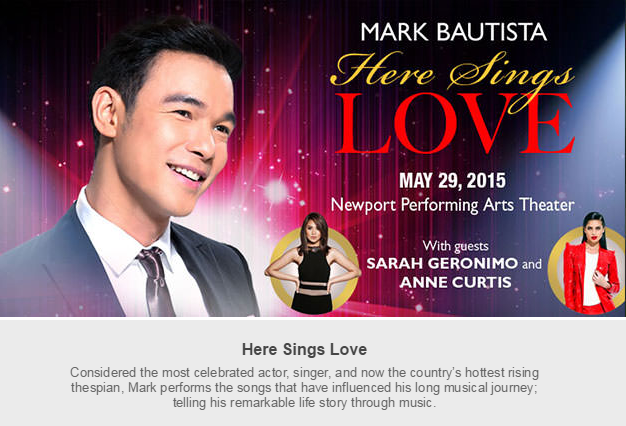 Considered the most celebrated actor, singer, and now the country’s hottest rising thespian, Mark performs the songs that have influenced his long musical journey; telling his remarkable life story through music. This concert is his way of saying thanks for the overflowing support he received from his time as of one of the main cast of Here Lies Love, a revolutionary musical that traces the astonishing journey of First Lady Imelda Marcos. Bautista shined on the big stage playing the part of one of Philippine history’s most polarizing personalities, former President Ferdinand Marcos.
Joining him on stage is fellow artist and pop star Sarah Geronimo, Anne Curtis, along with other guests that include the cast of the upcoming musical production, Bituing Walang Ningning: The Musical; a joint project of Resorts World Manila and Viva Entertainment where Mark also appears in as Nico Escobar, an iconic role previously played by Christopher de Leon.
Renowned musical composer and arranger Louie Ocampo and one of the most sought after directors Freddie Santos lead the production of the concert.
Here Sings Love happens on May 29, 2015 at the Newport Performing Arts Theater. Tickets are available at the NPAT Box Office (02 908 8000 loc 7700), Ticketworld (02 891 9999), and Ticketnet Online (www.ticketnet.com.ph).

5 Simple Things You Can Do to Avoid Oral Cancer

Reasons to Consider Using Stevia Instead of Sugar for Diabetics

You have successfully subscribed to the newsletter

There was an error while trying to send your request. Please try again.