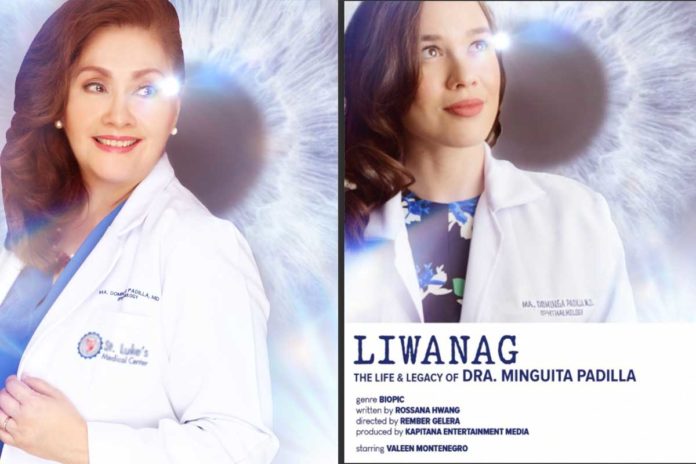 South of Metro | Bio-Film features Health Cruzader Dra. Minguita Padilla as Characterized by Valeen Montenegro | In a Bio-Film, Valeen Montenegro Plays Dr. Minguita Padilla, a healthcare crusader in the Philippines. On YouTube and Facebook, you can watch the short film as it premieres at 7 p.m. on January 4th, 2022 on the following Facebook Pages: Dra Minguita (@DraMinguita), He Said She Said Philippines (@HeSaidSheSaidPH), Padayon Ta Page (@PageofPage), and Kapitana Entertainment Media (@KapitanaEntMedia).

“Liwanag,” the inspiring story of Dr. Ma. Dominga Padilla, an opthalmologist who became a health advocate, has been turned into a 45-minute short film. In this time of the Covid-19 pandemic, Kapitana Media Entertainment, the company behind “The Women of TONTA Club,” has produced “Liwanag: The Life and Legacy of Dra. Minguita Padilla,” a documentary about the renowned eye doctor’s journey from an unassuming medical student to a public health advocate.

‘Together with friends of Dra. Minguita like myself and some of her family members, we decided to create a medical drama that will shed light on what she has done for our country,’ says Rossana Hwang, the producer and writer of the film. Even before the pandemic, Dra. Minguita has been providing care to the sick, particularly those with eye disorders.”

In her role as President and Founder of Eye Bank Foundation of the Philippines, Dra. Padilla has worked tirelessly since 1994 to procure, process, and distribute corneas and other eye tissues, making a significant difference in the lives of thousands of Filipinos, many of whom would have gone blind otherwise.

Doctors like Dra. Padilla worked together to raise money for hospitals, personal protective equipment (PPE), medical supplies, and even washing machines for the hospitals’ medical frontline workers after Covid-19 struck the Philippines. As a member of Doctors for Truth and Public Welfare and an expert on Covid-19, Dr. Padilla has participated in a number of webinars and online forums aimed at educating the general public on the disease, vaccination, and ways to avoid contracting it. Through her work with GoNegosyo, she has also been able to assist MSMEs. The City of Makati honored her last December with the Exemplary Makatizen Makahero Award for her work in teaching barangay health workers and other doctors about COVID-19 antigen testing, setting up a virtual testing area in her home, and making herself available to those in need in connection with the pandemic.

A biopic about Dr. Padilla was something she never expected to happen. Thank you to everyone who contributed to making this project a reality. When my friends and family encouraged me to take a big risk and run for public office, I knew it was because they cared about me and were aware of my motivations for doing so.”

The Partido Reporma party has nominated Dra. Padilla for a senate seat. Finally, in October 2021, she made the decision to follow the advice of various medical organizations and run for elected office.

CWS Party List to Push for a 30-year Infrastructure Program