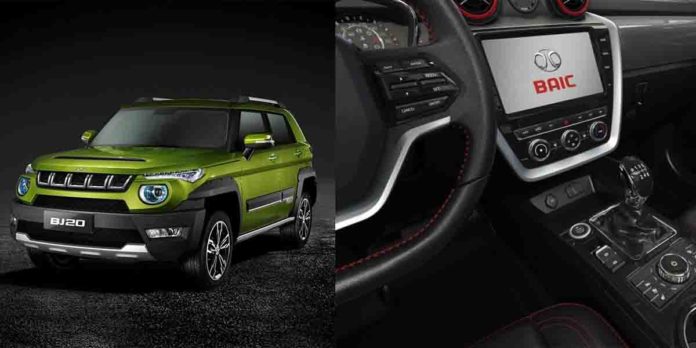 Launched globally in August 2016, the BJ20 was developed from the Beijing Auto Concept 500 demonstrator that was first shown at the Shanghai Auto Show in April 2013. While the BJ20’s renegade look depicts it as an eager and extroverted rover, the compact crossover’s capable undercarriage and sublime powertrain quietly ground it, making it an easy-going, all-season, all-around runabout. The BJ20 sports a futuristically functional, classically boxy, and ruggedly lived-in look. Up front, the feisty, furrowed brow of its grille-work is flanked by round and staring headlights with blue-toned reflector discs. Those main lights are topped by corner arrays of daylight running lights (DRLs) and underscored by park lights that are bedded deep in a big-boned bumper. The flanks are deeply ridged, depicting straightforward and spartan character lines which are continued and complemented by a straight-running roof line and straight-topped fender wells. Around those wells, polymer over-fender cladding is attached to the body with exposed rivets, those rivets pointedly giving the fenders some tactical-gear character. Those big wheel accents then flow into side-guards and a generous rear bumper, all these touches completing a look of wrap-around impact protection.

The BJ20 is a keen soft-roader. Its 215mm of ground clearance is the highest in its class. Large 225/55 tires on 18″ alloy rims give the BJ20 large pothole-crossing and bump-dampening wheels with 0.685 meter diameters. The BJ20’s front-mounted engine and front-wheel-drive (FWD) layout allows for a fully independent suspension system with McPherson struts up front and multi-links in back. That set-up doesn’t just keep the ride smooth and even but also provides enough articulation to keep both drive wheels in contact with the ground even on moderately uneven surfaces. If the BJ20 is forced to wade through floodwaters, the compact FWD transaxle has less vulnerabilities to water intrusion than does four-wheel-drive (4WD) or rear-wheel-drive (RWD) utility vehicles–the BJ20’s front-wheel drive shafts presenting less points of potential seal failure.

The FWD compact crossover SUV is powered by the well-proven and Euro 5 compliant Mitsubishi 4A91T turbocharged 1.5 liter gasoline engine that comes with that maker’s trademark MIVEC variable-valve-timing (VVT) system. That advanced VVT valvetrain optimizes the engine’s intake, allowing turbo-boost to peak earlier, and longer than on previous generation turbos. The engine delivers peak power of 147hp at 6000rpm derived from a torque curve that hits a top figure of 210Nm with the engine running at 2000 to 4500rpm. That’s 210Nm at 2000rpm and for 2500rpm more after that–torque numbers that look like they should be coming from a turbodiesel rather than a petrol burner, turbocharged or not.

The BJ20’s turbocharged engine was specified as much for efficiency as for performance. Instead of tempting him to floor the gas pedal on spirited romps, the turbocharger gives the driver the reassurance of an ace up his sleeve when dealing with daily crawls. Idling in bumper-to-bumper traffic, it burns fuel like a naturally aspirated 1.5 liter gasoline engine. But when you start moving forward, and only when you actually move forward, the turbocharger brings 50 percent more in virtual displacement, delivering the power of a 2.25 liter engine only when things spool up, and only when you need it. The BJ20’s designers also finessed the transmission. Rather than a traditional 5- or 6-speed automatic gearbox, the BJ20 mounts a well-proven continuously variable transmission (CVT). The modern and rugged gearbox has a deep starting ratio for heavy-hauling situations, offers Steptronic virtual discrete gears if you’re hankering for these, and has sport mode for when you want those optimal gear ratios continuously computed on the fly to be slightly deeper, multiplying those RPMs into richer torque. But, most importantly, the choice of a CVT gearbox keeps the engine turning without let-up during acceleration, not needing to ease off the gas for up-shifts, and keeping the turbocharger charged with engine revs.

With all this elegant engineering, and even with hard metallurgy that makes it weigh a ton and a half when empty, the BJ20 delivers impressive fuel efficiency numbers and attained an average of 13.15 kilometers per liter on comprehensive driving conditions through inter-city highways and inner-city streets.