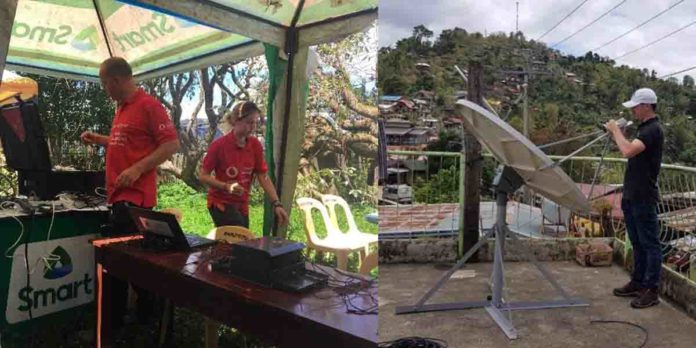 Evacuees and responders in Typhoon “ Ompong ”-hit Northern Luzon are now able to connect and share information with loved ones and colleagues with the help of emergency network solutions provided by Smart Communications and Vodafone Foundation.

Smart teamed up with Vodafone Foundation to provide emergency communications support to Batanes, Benguet and Ilocos Norte, which were severely affected by Typhoon “Ompong.”

“Reliable communication lines are important during disasters, because we need to send updated reports on response, on victims and relief efforts,” said police officer Sandra Tongacan, who availed of the Instant Wi-Fi and Charge services set up by Smart and Vodafone at the designated disaster operations and evacuation center in Barangay Tuding, Itogon, Benguet. Tongacan is a Philippine National Police women and children’s protection desk officer for Cordillera Autonomous Region.

Ompong, the strongest typhoon to hit the Philippines so far this year, battered Northern and Central Luzon, causing floods and landslides that killed dozens of people, damaging agriculture, and toppling communication lines.

The Vodafone Instant Charge and Instant Wi-Fi solutions were set up in Itogon, where retrieval operations for landslide victims were also ongoing.

Vodafone Foundation deployed its ultra-portable Instant Wi-Fi solution, which can provide a robust and secure Wi-Fi environment to up to 1,500 users across an area of up 10,000 sq m, depending on the strength of available internet connection.

It also set up an Instant Charge station, which has the capabilities to charge up to 66 phones simultaneously. The charging station set up by Vodafone in Itogon is able to charge up to 32 phones all at the same times.

Mayor Victorio Palangdan shared how challenging it was in the aftermath of the typhoon, because power and communication lines were damaged: “We were crippled because we didn’t have communication, it was very difficult for us,” he said.

“We all know communication is of utmost importance during emergencies. Because we send reports to Manila and even abroad, our connection needs to be available all the time,” said the mayor. “We thank Smart for their help,” adding that the Instant Wi-Fi and Charge services had been helpful to policemen and rescue personnel.

The Vodafone Foundation has been a longtime partner of Smart in providing emergency communications support to residents affected by disasters. In 2012, the foundation deployed its Instant Network during Typhoon “Pablo,” marking the first time Vodafone deployed the system in a country where it did not operate. A year later, the technology also served residents affected by Supertyphoon “Yolanda.”

The ultra-portable Instant Network can provide cellular coverage within 3- to 5-km radius and enable up to 80 calls and thousands of text messages sent simultaneously. The compact GSM equipment fits into four cases that can be carried on commercial flights, weighs less than 100 kg, and can be mounted in less than 40 minutes.

Similar efforts are underway in Batanes and Ilocos Norte, which were also hard-hit by Ompong.

“We are happy to work with Vodafone Foundation to provide support to those who were affected by Ompong,” said PLDT and Smart Public Affairs Head Ramon Isberto. “These Instant Network solutions complement our stepped-up restoration of communication services in areas where typhoon damage is severe,” he added.

Smart‘s collaboration with Vodafone Foundation is part of its #SafePH advocacy, which aims to help communities reduce disaster risk using mobile technology. It is also part of Smart’s commitment to the GSMA Humanitarian Connectivity Charter, which aims to empower mobile networks to respond to disasters.