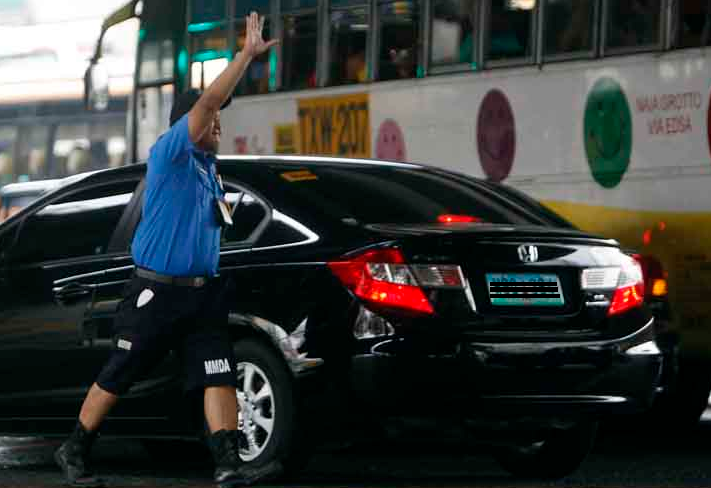 via Inquirer.net | by Maricar Brizuela |

In preparation for implementing the “no-physical contact apprehension policy” starting next month, the Metropolitan Manila Development Authority (MMDA) has warned drivers who conceal or tamper with their license plates that they can still be identified through its high-tech cameras.

MMDA Chair Emerson Carlos said on Monday that the closed-circuit television (CCTV) cameras installed by the agency on major thoroughfares were not only high-definition but also capable of recognizing vehicles’ license plates.

“We are advising motorists, especially those with cargo and delivery trucks, to fix their plates and make these visible,” Carlos added as he noted that some drivers intentionally tamper with their plate numbers or conceal these under dirt to avoid being held liable for traffic violations.

“Our cameras can recognize plate numbers even… from a distance,” he warned.

According to Carlos, drivers carrying dirty or improperly displayed license plates face a fine ranging from P150 to P200.

The MMDA has yet to set a specific date for next month’s implementation of the contact-less apprehension policy.

Earlier this month, its policy-making arm, the Metro Manila Council, approved a resolution stating that the system which makes use of CCTV cameras to monitor traffic violations was an effective way of catching erring drivers based on the results of a six-month test period nearly five years ago.

Initially implemented during the time of former MMDA Chair Bayani Fernando, the no-contact apprehension policy was revived in 2011 under then MMDA Chair Francis Tolentino but in just two areas: Commonwealth Avenue in Quezon City and Diosdado Macapagal Avenue in Pasay City.

Carlos had announced in a previous interview that this time, it would take effect on major thoroughfares like Edsa and C-5 and other areas in Metro Manila where the MMDA has working CCTV cameras and traffic constables.

At present, the agency has over 400 CCTV cameras with plans to install 160 others.

Carlos had also assuaged the fears of motorists that the system might be abused, saying that their basis for determining whether a violation had been committed would not be limited to the video footage. Traffic enforcers may also use cell phones and digital cameras to record violations, he said.

Errant drivers who receive a notice from the MMDA may also contest their supposed violations with the agency’s Traffic Adjudication Division within seven days of receipt.

In the absence of a protest, a final notice will be sent to the violator, asking him or her to settle the corresponding fine.

Carlos had said the implementation of the policy was aimed at instilling discipline in motorists as well as making them aware that they could still be held liable for traffic violations even in the absence of traffic constables.

He added that the MMDA also hoped to reduce its personnel’s physical contact with motorists to avoid contributing to traffic jams as well as help prevent incidents of extortion or bribery among its men.

Implementing the scheme, however, would not lead to the removal of traffic enforcers from the streets, Carlos also clarified.

Nor does it mean that the MMDA would issue traffic violation tickets to motorists based solely on the footage taken by its CCTV cameras. “We still need to evaluate the footage at the end of the day,” he said.