Home Community News & Bulletins Follow-up Story on ‘A Picture of the Past, Taken in the Present’

After posting my story and sharing the photos on FB, I never realized that it would go VIRAL. Thank you to all those who have appreciated and shared my post and photos taken in Intramuros! Thank you also to those who helped enhance the photos but I never got the enhanced version so I did some enhancement on my own. Upon using filters and stuff on the photo, the picture revealed even more than that of my first post.

It wasn’t meant to be a ghost story anyway. It was actually reliving that moment in time, in that very same place.

This is no ordinary picture. This is History Relived!

I just realized that there were more than just a few people that I have caught on my camera. I have actually captured an event in time that took place centuries ago. The photo revealed an event wherein people were congregating to a place. This was your typical Sunday morning activity wherein people would converge to attend church service.

This was once a very busy street. The Church of San Francisco and Convent/Hospital once stood there before it was destroyed during World War II (1945). This is the scene that is depicted in the photo. The Elite/rich-Ilustrados wearing their Sunday clothes walking on the sidewalk as they go to the Church. This is also the reason for the Nuns and the so called “Katipuneros” to be there. The other people are in front of the Church/Chapel that looked like it was made of wood.

There were a lot of things going on at the time and the photo has a lot to say about the place. I have researched on a few things about Intramuros, the era and its history. And this is what I found out:

Intramuros or otherwise known as “The Walled City” used to be surrounded by a moat. Just like the castles in Europe. The moat is used as a protective barrier which makes the city accessible only through “drawbridges”. (See map)

Rumor has it that enemies who try to penetrate the walls and were killed are thrown over the walls and into the moat. I guess the bodies were washed away by the current of the Pasig River. Most of the moat are gone now and is now a golf course.

This may also be the reason for the said sightings in Intramuros. 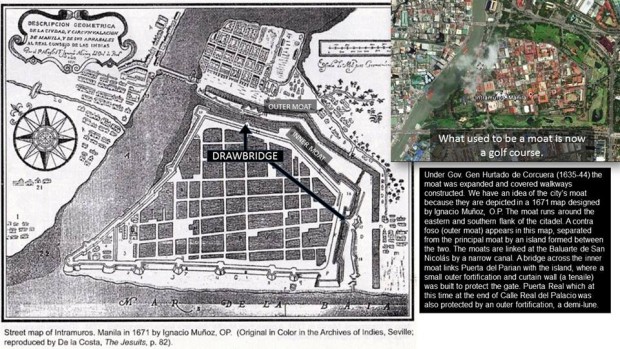 Before the American Era, entrance to the city was through eight gates or Puertas namely (clockwise, from Fort Santiago) Puerta Almacenes, Puerta de la Aduana, Puerta de Santo Domingo, Puerta Isabel II, Puerta del Parian, Puerta Real, Puerta Sta. Lucia, and Puerta del Postigo. Formerly, drawbridges were raised and the city was closed and under sentinels from 11:00 pm till 4:00 am. It continued so until 1852, when, in consequence of the earthquake of that year, it was decreed that the gates should thenceforth remain open night and day.
– Wikipedia

I have tried several filters on the photo and to my surprise, new discoveries have emerged. Once hidden from our view can now be seen. Even simple onlookers are defined in the photo.

No, Intramuros is not to be scared of its paranormal sightings. It has a rich culture and heritage that we should be proud of. Christianity has started within the walls of the city. Intramuros is to be admired as one of the first major city to be established in Manila. Infact, 0 KM is located at the Manila Cathedral. This means that this is/was the center of probably everything from architecture, business, religion, etc. for the development of the city and later on the country.

Intramuros (Spanish for “within the walls”) is the oldest district and historic core of Manila, Philippines. It is also called the Walled City, it was the original city of Manila and was the seat of government when the Philippines was a component realm of the Spanish Empire. Districts beyond the walls were referred as the extramuros of Manila, the Spanish for “outside the walls”. – Wikipedia.

Let us not visit the place because of its paranormal stories, but rather let us educate ourselves and appreciate the beauty of its History.

The History of Intramuros lives on.

To God be the Glory.